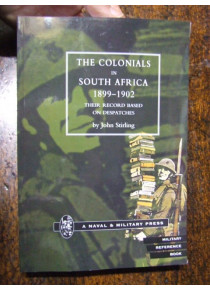 COLONIALS IN SOUTH AFRICA 1899-1902: Their Record, Based On the Despatches﻿ by John Stirling﻿ - new book

The only Boer War book to study the work of all the colonial troops - especially useful when trying to fathom the operations of some of the less well-known colonial forces such as Brabant's Horse, the Heidleburg Volunteers or the 1st New South Wales Bushmen.

A record similar to the author's earlier volume Our Regiments in South Africa. A directory of Colonial Volunteer Corps and their work in the South African campaign.The information is drawn from official despatches, other reliable published accounts and from private accounts furnished by officers in the field.﻿

Of the Australian contingents, 16000 men went to war, 282 died in action or from wounds sustained in battle, while 286 died from disease and 38 died of accident or other unknown causes.