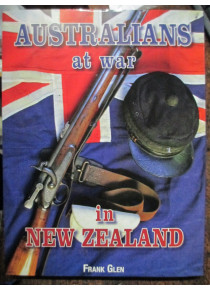 Australians at War in New Zealand by F. Glen

Australians at War in New Zealand by F. Glen

Australians at War in New Zealand

The New Zealand Wars or as they were once known Maori Wars was a conflict between the traditional owners of New Zealand and British colonists during the period ﻿1845 to 1872﻿.

At the peak of hostilities in the 1860s, 18,000 British troops, supported by artillery, cavalry, Australian volunteers,﻿ local militia, battled about 4000 Maori warriors.

Although, the British forces in New Zealand were reinforced﻿ by a number of regiments based in Australia.﻿ ﻿In the early 1860's, the New Zealand Government also appealed to the Australian colonies for help and the response was deemed to be 'generous beyond measure'. ﻿﻿The promise of farmland, reliable pay benefits and of course patriotic adventure, resulted in the recruiting of﻿ 2400 Australian volunteers in 1863 from an Australian population base of 1.5 million settlers.﻿

This account is specifically confined to the period of Australia's greatest contribution of men, naval assets﻿ and munitions beginning in 1860.

Certainly, this book has strong appeal from a genealogy﻿ perspective,﻿ to anyone whose forebears may have been one of the Australian﻿ volunteers. An in-depth account of Australia's participation in the historical and widely unknown New Zealand Wars.﻿

The narrative is supported by period photography and maps. Appendix includes a biographical list of Australian volunteers killed in action or died of wounds in New Zealand 1860 to 1867.

The book itself is a hard cover with dust jacket﻿, a nice leather look cover with silver foil﻿ title decorations.﻿