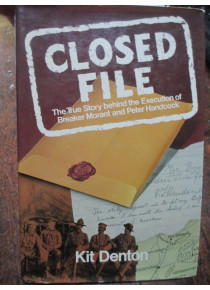 A scarce account of the history behind the executions during the boer war.

It has now been over 40 years since the Bruce Beresford﻿ Film ' Breaker Morant' rekinded Morant's legend in the early 1980's.  This movie largely based upon nationalistic folklore, such as George Witton's book Scapegoats of the Empire (1907), the novel by Kit Denton called The Breaker (1973).

This nonfiction﻿ book was published by Denton in 1983 as a follow-up to The Breaker novel. It is quite scarce, commands high prices.﻿