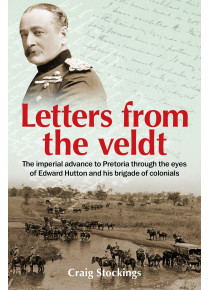 The South African War – or Boer War – running from 11 October 1899 until 31 May 1902 –was the largest British military effort since the Napoleonic Wars.  It was also the first time that large-scale, meaningful contributions were made to an active theatre of war by the self-governing colonies. This included formal contributions of around 20,000 troops from the Australian colonies which dwarfed all previous Australian military commitments.

Just as the war was a watershed event for the development and professionalisation of the British Army from 1902-14, it was momentous for the self-governing colonies in Australia and elsewhere in social, political and most certainly in military terms.

Letters from the Veldt sheds light on the activities of imperial military contingents – in which Australians served –  during the Imperial march to Pretoria from May-September 1900, the successful conclusion of which marked the end of ‘conventional’ operations in South Africa and the beginning the ‘guerrilla’ phase that would drag on until May 1902. A large proportion of colonial troops serving in South Africa at this point did so as part of the 1st Mounted Infantry Brigade.

Despite their importance, the experiences of this brigade have not figured largely in existing any accounts of the Boer War. The brigade itself was composed of not only Australians, but Canadians, New Zealanders, and British regular and volunteer troops, and a scattering of ‘loyal’ South Africans. It was in many ways a microcosm of imperial military cooperation; an important part of the steady development of attitudes, expectations and shared experience which led to the formation in 1914 of a much larger expeditionary force.

This account does not follow a standard pattern or format – there is no measured, steady traditional narrative. Rather, the experiences of the 1st Mounted Infantry Brigade, and the light they shed on many wider issues, are presented through letters written home by its British commander, Major General Edward Thomas Henry ‘Curly’ Hutton – himself a little-known yet key figure in the early history of the Australian military.

Read within their context, the Boer War letters of Major General Edward Hutton offer a window not only into the course and conduct of the imperial advance to Pretoria, but also a lens through which to better understand a range of wider issues that framed his world – the world of Australian military history before the term Anzac was coined.

﻿Further
Sir Edward Thomas Henry Hutton (1848-1923), British regular soldier and first organiser of the Australian Army, was born on 6 December 1848 at Torquay, Devon. Hutton was educated at Eton after which he joined the 60th Rifles as an ensign in 1867. He was promoted captain in 1879 and major in 1883. In 1879-85 he saw much active service in Africa, in the Zulu War (1879), the first South African War (1881), the occupation of Egypt including the battle of Tel-el-Kebir (1882) and the Nile Expedition (1884-85). During this period he became deeply interested in the training and employment of mounted infantry with which he thrice served on operations.

At Aldershot, England, he raised and commanded mounted infantry units in 1888-92, becoming recognised as one of the leading proponents of this form of mobility. A good speaker with a flair for publicity, he was identified as one of the 'Wolseley Ring' of army reformers. He also founded the military society at Aldershot as a professional forum. In 1889 Hutton was promoted lieutenant-colonel and colonel in 1892.

'Curly' Hutton became commandant of the New South Wales Military Forces with the local rank of Major General in 1893. The advent of an able leader committed to military reform and with recent war experience revived the flagging spirit of the New South Wales forces. Hutton inspected units in every part of the colony, addressed public gatherings and brought the army before the community, beginning with a major review in Sydney in July 1893. On one of his inspections he travelled 680 miles (1094 km) in twenty days including 500 miles (805 km) on horseback. He visited training camps and exercises, delivered lectures to officers, fostered rifle clubs and supported the movement for raising national regiments such as the Irish Rifles.

Valuable as the public side of his work was, Hutton's reorganisation of the New South Wales forces was even more important because it gave the colony an army capable of taking the field as part of a Federal force.﻿