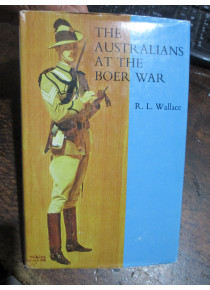 The Australians at the Boer War by R.L. Wallace  - used book

This military book is one of the best Histories devoted to Australian Boer War operations. First printed in 1976, this book being offered is that 1st edition. The book was published by The Australian War Memorial and The Australian Government Publishing Service.

Has the full history of the Australian battalions / contingents to the South African War of 1899-1902, including the siege of Elands River Ladysmith Paardeberg Bloemfontein Transvaal +++ and the 'Breaker' Morant affair. 16,175 Australians risked all to serve their Queen, Empire and Country in the Boer War . This 420 page hardback book in excellent condition contains both a large number of photo plates and an extensive index which includes the names of many individual Australian participants in the conflict (some in Imperial and South African units as well as civilians).
Hard to find in any condition .... Here's your chance.