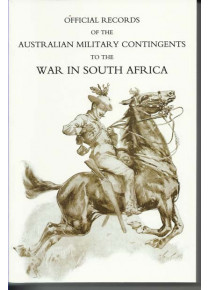 OFFICIAL RECORDS OF THE AUSTRALIAN MILITARY CONTINGENTS
TO THE WAR IN SOUTH AFRICA' by Lt-Col P. L. Murray.

OFFICIAL RECORDS OF THE AUSTRALIAN MILITARY CONTINGENTS TO THE WAR IN SOUTH AFRICA'
by Lt-Col P. L. Murray.

Reprint of the original Australian Government official publication containing an astonishing amount of information on the activities of the contingents from all over Australia during the Boer War with many nominal rolls, plus details of equipment, pay, honours and awards.
Australia’s contribution to the war, as this volume makes clear in minute detail, was a major one, presaging its massive sacrifice a decade later...

As its author emphasises, this book is not a history
of the war, but a statistical register and reference. As such it will prove invaluable to serious students. It does, however, also include descriptions of actions in which Australian units took part, and will prove absorbing to anyone who wishes to know the reality of Australia’s part in the war behind legends such as that of ‘Breaker Morant’.
The book was first published in 1911. The book being offered is a professionally produced reprint of that history. It is a true reproduction of the 1911 1st edition. An original copy of this rare book is virtually unobtainable - interesting that a late 1980's reprint is now for sale for $400 + . Even this reprint will escalate in value when it to becomes out of print. Here is your chance to obtain this book that can be treasured as a hand me down Family History Book.

Brief history of each contingent, nominal roll lists men serving in each Contingent with extreme detail many to Squadron/Company level with important highlites of service.
An exhaustive work of 607 pages......The first book to pick up when it comes to Australian Boer War Research !

By the end of the Boer War 282 had died in action or from wounds sustained in battle, while 286 died from disease and another 38 died of accident or other unknown causes.
Six Australians received the Victoria Cross.