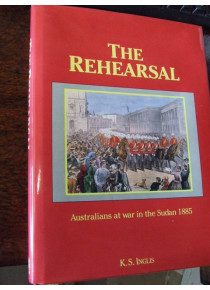 History of Australians At War in the Sudan War 1885

The Rehearsal Australians At War in the Sudan War 1885' by K. S. Inglis.- used book

The Rehearsal ' by K. S. Inglis. The full history of NSW Contingent which was sent to War in Sudan which began when Gordon was slain in Khartoum. Some of the NSW Contingent were Crimean , Indian , Zulu and Afgan veterans who had come to Australia to settle. Magnificent record of this little known Contingent. excellent researched text with heaps of illustrations from the times. Fully Indexed