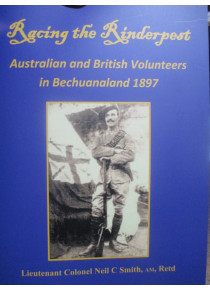 In 1896 a serious epidemic of rinderpest (an infectious viral disease of cattle and some other animals) broke out in Bechuanaland (now South Africa / Botswana) affecting many cattle herds. The government took drastic measures and issued regulations to combat the outbreak that included the slaughtering of infected herds. The Bataplin tribe from the former Crown Colony land objected to the regulations and refused to implement and comply. The government formed a volunteer force comprising in part of Australian and British Volunteers - the operation become known as the Langberg Campaign . This is their story.

The book has an historical narrative about the campaign, biographical information about the Australian participants together with a complete nominal roll.