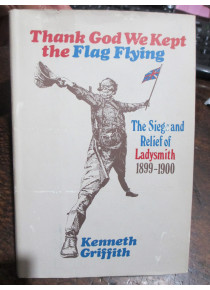 A well researched history of the Siege and Relief of Ladysmith during the Boer War 1899 to 1900. The battle occurred early in the Second Boer War. Importantly, this book was first published in the 1970's when many of the surviving soldiers of both sides were available for interview about the conflict. The detailed narrative is supported by numerous maps and illustrations. The author quotes from letters, diaries and official documents.

Siege of Ladysmith: The siege in Natal during the Boer War that ensnared a British army from 2nd November 1899 to 27thFebruary1900, but blocked the Boer invasion of the colony. The British were short of regular troops, so Britain engaged volunteer forces from Britain, Canada, Australia and New Zealand who brought new ideas and more imaginative formations to the battlefield.