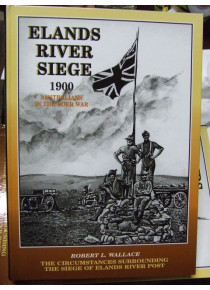 This is a reprint of a Wallace classic ' History of the Elands River Siege .

The Battle of Elands River was an engagement of the Second Boer War that took place between 4 and 16 August 1900 in western Transvaal. The battle was fought by the Elands River between a force of 2,000 to 3,000 Boers who attacked a garrison of 500 Australian, Rhodesian, Canadian and British soldiers, who were stationed at Brakfontein Drift near the Elands River to act as a garrison for a British supply dump. Over the course of 13 days, the garrison was heavily shelled and attacked with small arms. Outnumbered and surrounded, the garrison was asked to surrender, but refused. The siege was subsequently lifted when the garrison was relieved by a 10,000-strong column led by Lord Kitchener.