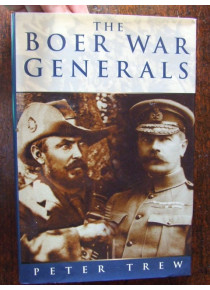 The Boer War (1899-1902) witnessed the professionals of the British Army pitted against the gifted amateurs who led the Boer commandos. For the Boers, it was a struggle for independence; for Britain, an attempt once and for all to assert her political supremacy in South Africa.

While sheer weight of numbers and ruthless tactics eventually secured a British military victory, the extraordinary Boer effort won respect worldwide. This is an in-depth study of the principal commanders on both sides, in a conflict that was both the last of the gentlemen's wars and the first modern one. The three British Commanders-in-Chief were established regular soldiers who stood high in public esteem when they went out to South Africa. For Roberts, the war was a final triumph, albeit somewhat tainted when it dragged on for another year and a half after his departure; for Kitchener, it was a tedious and exhausting interlude which delayed his appointment as Commander-in-Chief in India; and for Buller, the graveyard of his reputation. The Boer Generals were Louis Botha, Christiaan de Wet, Koos de la Rey and Jan Smuts, of whom the first three were farmers and legislators with little conventional military experience. Smuts, after a brilliant academic career at Cambridge, was a senior but very young state official. In the course of the war, the men proved in different ways to have outstanding natural military ability. For De Wet, this was a time of fulfilment when all his special gifts came into play; for Smuts and Botha, it was a preparation for their future careers as politicians; and for De la Rey, who hated war, it was a heavy but unavoidable duty which he discharged with distinction. Peter Trew's narrative examines each personality separately, highlighting the differences between the command styles of the experienced, professional British generals and the natural ingenuity of the amateur Boers.﻿