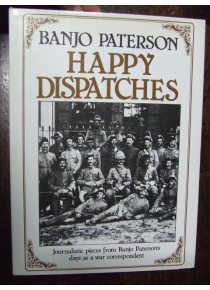 In 1934 Banjo Paterson wrote this book based on his experiences as a war reporter he titled the book - Happy Dispatches
Paterson became a war correspondent for The Sydney Morning Herald and The Age during the Second Boer War, sailing for South Africa in October 1899. His graphic accounts of the relief of Kimberley, surrender of Bloemfontein (the first correspondent to ride in) and the capture of Pretoria attracted the attention of the press in Britain. He also was a correspondent during the Boxer Rebellion, where he met George "Chinese" Morrison and later wrote about his meeting﻿.
Click to view Banjo Paterson's Wiki Page