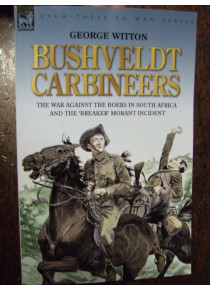 The author, Australian George R. Witton (1874 – 1942) was a Lieutenant in the Bushveldt Carbineers during the Boer War in South Africa. He was sentenced to death for murder after the shooting of Boer prisoners. Subsequently, he was reprieved by Kitchener, although Lieutenants Peter Handcock and Harry "Breaker" Morant who had been court martialed with him were executed by a firing squad on 27 February 1902.

﻿This book is a direct reprint of Witton's book, Scapegoats of the Empire which was originally published in 1907 by D. W. Paterson of Melbourne.﻿ Witton wrote this book after his return to Australia mainly to put his case forward as to what was the true story of the Bushveldt Carbineers. Asserting that he, Morant, and Handcock were made scapegoats by the British authorities in South Africa — that they were made to take the blame for widespread British war crimes against the Boers, and that the trial and executions were carried out by the British for political reasons, partly to cover up a controversial and secret "no prisoners" policy promulgated by Lord Kitchener﻿.
Witton was depicted in the famous movie 'Breaker Morant'.