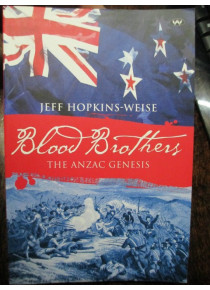 This military book is a concise study of Australia's roll and Australians who took part in the New Zealand Wars 1840's and 1860's.

The New Zealand Wars, which were also known as the Maori Wars, were a series of armed conflicts that took place in New Zealand from 1845 to 1872 between the New Zealand government and indigenous Maori﻿. Australia sent a force to assist New Zealand. Of interest, has an Appendix which names 53 Australian casualities of the conflict.