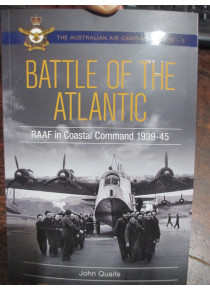 No 3 in The Australian Air Campaign Series

At the outbreak of World War II, somewhat by accident — and just as the first shots of the war were fired — young Australian airmen from the Royal Australian Air Force were engaged in operations that would become known collectively as the Battle of the Atlantic. Arguably lesser-known than air campaigns in other theatres, large numbers of Australians who volunteered for service with Royal Australian Air Force, found themselves fighting in this battle. Australians were there at the outbreak and many would go on to fly some of the final missions of the war in Europe.

This book details many of the experiences of RAAF members who served with Coastal Command. Stories of the famous Sunderland squadrons (10 Squadron RAAF, 461 Squadron RAAF, the Anzac Squadron) and the Battle of the Atlantic dominate the narrative. The Battle of the Atlantic also dominated Coastal Command throughout the war but Australians served in a surprising variety of other roles. The nature of many of those tasks demanded persistence that could only be achieved by large numbers of young men and women being prepared to ‘do what it took’ to get a tedious and unrewarding job done. Over 400 did not come home.