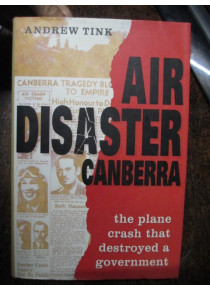 Air Disaster Canberra: Plane Crash That Destroyed a Government, by A. Tink

In August 1940 Australia had been at war for almost a year when a Hudson bomber - the A16-97 - carrying ten people, including three cabinet ministers, crashed into a ridge near Canberra. In the ghastly infer that followed the crash, the nation lost its key war leaders. One that died in the crash was Cyril Brudenell White the WW1 AIF stalwart who devised the Gallipoli evacuation. He was a key WW2 Australian Military Leader and deprived the Country of a great military mind.

Over the next twelve months, it became clear that the passing of Geoffrey Street, Sir Henry Gullett and James Fairbairn had destabilised Robert Menzies' wartime government. As a direct but delayed consequence, John Curtin became prime minister in October 1941. Controversially, this book also tells the story of whether Air Minister Fairbairn, rather than the Royal Australian Air Force (RAAF) pilot Bob Hitchcock, had been at the controls. Andrew Tink tells an engrossing and dramatic tale of a little-kwn aspect of Australia's political history.﻿