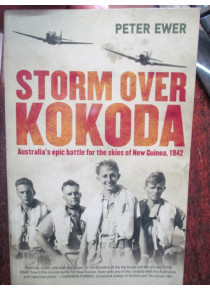 Storm over Kokoda Australia's Epic Battle for the Skies of New Guinea, 1942

Storm over Kokoda Australia's Epic Battle for the Skies of New Guinea, 1942

Most of us have heard of the battered and muddy troops who 'saved' Australia on the Kokoda Track during the darkest hours of the Pacific war. Far fewer know of the Australian pilots and aircrew of 75 Squadron who first checked the Japanese advance into the South West Pacific, in desperate air fighting that swirled over the jungles of New Guinea and the base at Port Moresby, fully six months before the land campaign began.

Storm Over Kokoda tells how Australian crews, in a handful of Hudson bombers, Hurricanes and Catalina flying boats, took the fight to the Japanese. Peter Ewer draws on eyewitness accounts and combat reports to shed new and exciting light on a neglected episode in Australian military history. This is not merely an 'aviation' story, but a compelling tale of men at war - on both sides - in a harsh physical environment. This was a time when every flight proved an epic, and every man a hero.