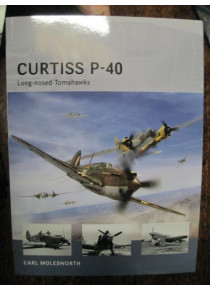 The fighter was made in the USA. This book is a technical publication about the Tomahawk version and is not dedicated to RAAF use but RAAF is mentioned.
Please also see our DVD about the Kitty in Australia - Click to see DVD.

The 1st delivery of  P-40s (P-40A, B and C) were actually made to the RAF as Tomahawks (Long Nose) and were used by No 3 & 450 Squadron, RAAF stationed  in the North africa, where Wing Commander "Killer" Caldwell used the fighter at its best scoring over 20 victories, other Australian pilots who flew the Kittyhawk were, Nicky Barr, John Waddy, Bob Whittle (11 kills each) and Bobby Gibbes﻿ .﻿

Nicky Barr, said of the Hawk, "The Kittyhawk became, to me, a friend. It was quite capable of getting you out of trouble more often than not. It was a real warhorse.﻿"

Kittyhawk was actually the no1 fighter used by the RAAF in WW2, there were more Kitty's in RAAF service than the Spitfire.