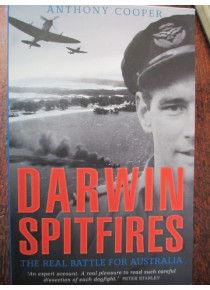 Darwin Spitfires The Real Battle for Australia by A Cooper : new book

The air raids on Darwin in period 1942-43 constituted the only sustained assaults on Australian mainland during WW2. As a result of earlier Japanese attacks No. 54 and No 452 Squadrons' arrived at RAAF Station Darwin and Batchelor Airfield respectively on 17 January, and No. 457 Squadron began to operate from Livingstone Airfield on 31 January.

No. 452 Squadron subsequently moved to Strauss Airfield on 1 February.

The Darwin area had been attacked 50 times before the Squadrons of  No. 1 Fighter Wing arrived. Conditions at Strauss and Livingstone were primitive, with these airfields comprising narrow dirt runways and tree-lined taxiways.

The pilots were not familiar with operating from such under-developed airfields, and the squadrons at Strauss and Livingstone suffered a high accident rate during February and March 1943﻿

Air Ace Caldwell was a member of this group.