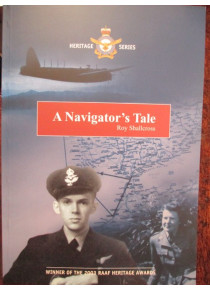 A Navigator's Tale by R. Shallcross

The Author enlisted in the RAAF in January 1942, volunteering for training as an Air Observer/Navigator. He graduated at Nhill with No 2 Air Navigation School, then went on to Canada with further training under the Empire Air Training Scheme.  He trained with No 1 Torpedo Training Unit on Wellington Heavy Torpedo Bombers in Northern Ireland and Scotland. He was then transferred to Ferry Command as navigator of a three-man crew delivering new Wellington bombers to Rabat in French Morocco. He was then posted to No 512 Squadron, Transport Command.

The duty of his squadron was to provide close air support to the army. So Roy took part in the evacuation of casualties from the Normandy bridgehead, later towed a glider to Arnhem and parachuted ammunition to the troops at Bastogne . In 1945, the squadron led the great armada of about 1400 tugs and gliders at the airborne crossing of the River Rhine. The 502 Squadron followed the fight line forward into France and Brussells.

Discharged from the RAAF in August 1945, Roy returned to his pre-war occupation as an accountant. He quickly found this unrewarding, after the excitement of flying, and made his future in manufacturing and marketing of plumbers' brassware.