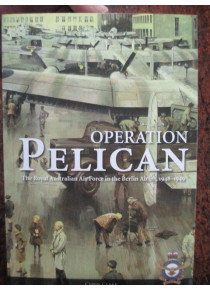 Operation Pelican: The Australian Air Force in the Berlin Airlift by C. Clark

In 1948 Britain, France and the United States of America found themselves opposed to their former wartime ally, the Soviet Union, over matters regarding control of Berlin, the capital of the defeated Nazi German regime. When the Soviets imposed a blockade of the city, the Allies had no option but to begin flying in the necessities of life for the two million inhabitants of the zones under their administration. Thus began the first large-scale humanitarian airlift in history.

When Britain turned for support to its Dominion partners, the transport element of the Royal Australian Air Force had recently ceased flying a regular courier service for Australian occupation forces involved in garrisoning another defeated Axis power of World War II, Japan - this role having been handed over to a commercial airline. By September 1948 an unnumbered Australian squadron had joined other RAAF transport crews already engaged as part of the massive allied undertaking.

To the Americans the 15-month-long operation was codenamed Vittles, while the British called it Plainfare. But to the Royal Australian Air For personnel involved, the Berlin Airlift was known as Pelican. Here the story is told of the events that made the airlift necessary, what the undertaking entailed and the part that Australians played in it, as well as the outcome and achievements of Operation Pelican.