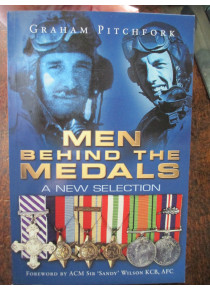 Air Men Behind the Medals WW2

Air Men Behind the Medals A New Selection by G. Pitchfork﻿

A tribute to the bravery of 20 Allied airmen who flew combat operations during World War II. Encompassing a wide cross-section of operational roles, theaters, aircraft types, and aircrew categories, the men behind the medals' experiences and actions are narrated in relation to the wider war.

These crucial operations are seen through a variety of different actions, including a night-fighter crew and a navigator who took part in supply drops to Resistance movements. The air war at sea is seen through the experiences of a Beaufighter pilot and a Royal Navy observer who attacked the Italian Fleet at Taranto. ﻿