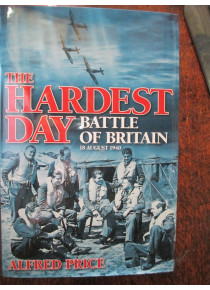 The Hardest Day Battle Of Britain 18 August 1940 by A Price : new book

This Battle of Britain book was first published in 1979. The book is dedicated to Sunday 18 August 1940 which has been deemed to be the changing day in the Battle. There were only 25 Australians eligible for the Battle of Britain clasp to the 1939–45 Star. Others flew during the battle with RAF Bomber Command and Coastal Command but the total number involved in the battle did not exceed 35. Eight Australians became air aces by shooting down five or more enemy aircraft. Pat Hughes from Cooma had 14 successes, which puts him among the ten leading aces of the battle.﻿