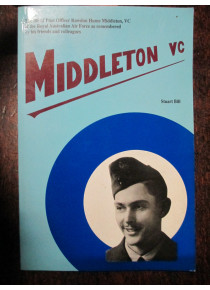 Middleton VC ' written by S. Bill . Follows the life of Australian pilot Rawdon Middleton VC who won the highest award for valour the Victoria Cross. Middleton occupies a unique place in Australia's history as he was the only member of the RAAF who served in the Europe theatre to be awarded a VC. Has some nice name student lists of Empire Training scheme members.
Awarded Victoria Cross posthumously for action at Turin, Italy whilst serving with RAAF attached to No 149 Squadron, 3 Group, Bomber Command , RAF as a Flight Sergeant . Although the citation of his Victoria Cross shows his rank as Flight Sergeant, his commission as a pilot officer was back dated to the 15th November 1942.

After a night raid on Turin Middleton's aircraft was damaged and low on fuel. Middleton and his second pilot were also severely wounded. Despite his diminishing strength Middleton made the decision to head for the English coast, where five of his crew were able to parachute to safety. Middleton, however, and two of his crew did not survive.

Middleton died trying to ensure the safety of his crew.