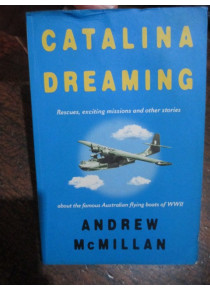 Catalina Dreaming - Rescues, exciting missions and other stories by A. McMillan

Personal history of the RAAF Catalina flying boats based in Cairns, Karumba, Darwin and Melville Bay during WW2 - the men who flew and the men who maintained the Catalinas.

The Catalina was the ugly duckling of combat aircraft, with a top speed less than that of a modern automobile. Yet it could carry enormous weights and remain in the air for up to 32 hours. From their bases on the far north coast of Australia, the Australian Catalinas were able to carry out bombing raids and rescue missions as far away as the coast of China.

Andrew McMillan, a historian, has visited the bases, consulted the archives and talked to many of the men involved. With affection he has told their story and the story of the aircraft they often came to love.

Click Here to see our other Australian Catalina ﻿Books.