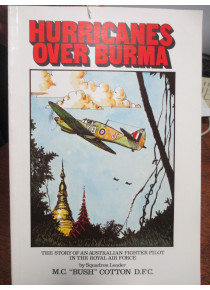 He returned to Australia towards the end of WW2 in a test flying capacity at RAAF Laverton Victoria.

He said of his Hurricane, "I flew and loved the Spitfire, the Hurricane was a wonderful machine. Rugged, easy to fly and maintain, a superb gun-platform because of its stability and viability, it could absorb an enormous amount of punishment."

He frankly discusses his colleagues, friends, enemies, his flying tactics and his feelings whilst fighting over the jungle in the face of chilling odds.

﻿After the war he returned the family timber business at Oberon NSW.
He passed away on the 22nd September 2006.

Although an autobiography of his wartime experiences there are biographies of several other pilots within the book. Including the Memoirs of Wing Commander "Bunny" Stone DFC, and small biography of 13 other pilots.