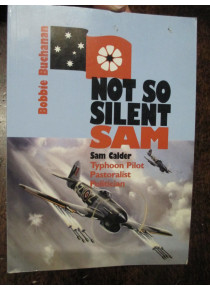 Not So Silent Sam Sam Calder by B Buchanan

Australian Flight Lieutenant Stephen "Sam" Calder DFC flew Hawker Typhoon fighters during WW2. Sam was a Melbourne boy who had joined up the day after war was declared.
He trained in Canada as part of the Empire air training scheme. ﻿
In September 1942, Sam Calder was posted to Squadron Number 182.
At the time there were hundreds of Australians in England waiting to get into aircraft and the newly formed Squadron picked up a number of them. He was eventually promoted to CO of RAF Typhoon Squadron 198. The Typhoon or "Tiffie" was twice as heavy as the Hurricane but with the special the Sabre engine it was able to fly faster.

This book is a biography of his whole life.﻿