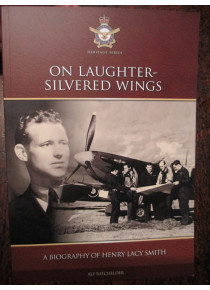 On Laughter Silvered Wings A Biography of Henry Lacy Smith by A. Batchelder

On Laughter-Silvered Wings is a biography of Flight Lieutenant Henry Lacy Smith, an Australian World War II fighter pilot whose remains were discovered, still in his Mk. IX Spitfire, in the Orne Estuary in Normandy in 2010.

A loom tuner from the Sydney suburb of Kogarah, Lacy transferred from the army to the RAAF in May 1941. Following initial training at Bradfield Park and Narrandera, he crossed the Pacific aboard the luxury liner Mariposa for training in Canada as a fighter pilot under the Empire Air Training Scheme. Graduating as dux of his course, Lacy served with Nos 66 and 132 Squadrons, RAF, before joining No 453 Squadron, RAAF.

On Laughter-Silvered Wings reminds readers that fighter pilots were not constantly engaged in aerial warfare. Alongside duties that ranged from routine patrols and escorting bombers to attacking V-1 launch sites and developing new skills to support the invasion of Europe, Lacy Smith wondered and worried about his family in Sydney, enjoyed occasional spells of leave, and fell in love with the beautiful Edna Dorothy “June” Miller, whom he married in January 1943.

On 19 April 2011, Flight Lieutenant Smith was laid to rest in Ranville War Cemetery, Normandy. The wreck of his Spitfire is undergoing conservation for eventual display at the RAAF Museum, Point Cook.