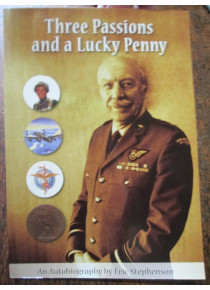 Three Passions and a Lucky Penny by Eric Stephenson

For nearly 30 years Dr Eric Stephenson was a medical officer in the RAAF, rising to be Director General Air Force Health Services with the rank of Air Vice-Marshal. Even in retirement, he continued working in the Defence health field, until his association with the RAAF reached the extraordinary span of more than 50 years.

In this autobiography he describes his early life in England, where the three great loves of his life - Freda, the Air Force and medicine - had their beginning.

During World War II, he served in the RAF as a Lancaster bomber Navigator. In 1943, during a raid over Germany, his Lancaster became damaged due to German antiaircraft gun fire.﻿ Luckily he was able to parachute to safety where upon he was taken POW at Stalag Luft III, until the end of war.﻿ Their compound was located about 5 km east of the North compound which was to be made famous by the so-called 'Great Escape'. This entailed digging an elaborate tunnel from the North compound to the outside perimeter fence. The 1963 American film called The Great Escape, gave a very good portrayal of the camp life. Although the actual depiction in the movie was somewhat fictitious.﻿﻿

His return from captivity at the end of the war allowed him to pick up where he left off with fiancée Freda, and saw him become a country doctor in Norfolk.

In 1955 he also resumed wearing Air Force blue, only this time in Australia. Here he describes the many momentous changes that he has observed and helped happen in the practice of medicine, both within aviation and the general community-in between indulging his fourth passion (travel to exotic places).

‘Doc' Stephenson has become virtually an institution in the RAAF.