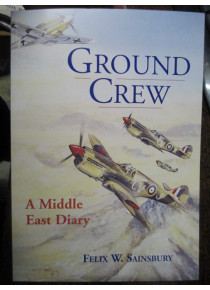 This is the true story of desert warfare compiled from the author's diary during his service with No 3 RAAF Fighter Bomber Squadron in the Middle East.  It includes detailed events of action during the Squadron's campaigns in Syria, Lebanon, Palestine, Egypt, Libya, Cyrenaica, Tripolitania, and Tunisia.

The author has written a very interesting and descriptive story of events as they happened in a day by day scene of action in service with the Squadron. No 3 sqn is the most senior RAAF squadron, having served in World War 1 as the Australian Flying Corps.  It still operates today at Williamtown Air Base NSW, flying FA18 Hornets. It was the first Australian Squadron to serve in the Middle East, arriving at Port Tewfik Egypt in 1940.

Very little has been documented on the experiences, hardship and dangers faced and endured by ground crews serving in the extreme situations and conditions of desert warfare. The desert convoys were easily identified from the air and made prime targets for the German aircraft. The seemingly never-ending sand and dust storms wreaked havoc with transport and aircraft alike.

Other difficulties experienced were the crossing of rugged waddis, climbing up high escarpments, miles of hot desert travel, the allied advances and the panic of those life threatening retreats, arriving and establishing an advanced landing ground, consistent day and night strafing and bombing raids, the shortage of water (only a bottle per day for drinking and washing), blazing heat by day and freezing nights, the ever present loss of life with landmines and S mines hidden all through large areas of the desert waiting for a victim.

Sainsbury details the legendary exploits of some of our ace pilots who were unstinting in their praise and respect for their ground crews. He recalls time spent on leave in Lebanon, Palestine, Alexandria and Cairo, passing through well-known places of battle - Sidi Barrani, Sollum Pass, Gambut, El Adem, Tobruk, Benghazi and Tripoli.

Out of all this emerged the most important asset of all; the comradeship, the mateship born out of loyalty and determination to get the job done. The Australian ground crews were outstanding in these unforgiving conditions.  They met and challenged the unexpected dangers to achieve a brilliant record of service, bravery and devotion.

The author has presented this true story as it happened in those unforgettable days of action and life in the far off deserts of North Africa.