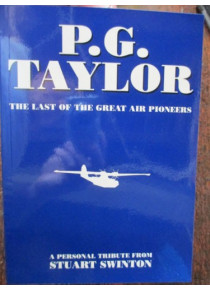 Sir Patrick Gordon Taylor GC OBE MC﻿ was an Australian aviator he was born in Sydney in 1896. In World War I he applied to join the Australian Flying Corps. Surprisingly, he was rejected so he went to the England where in 1916, he successfully was commissioned as a pilot into the Royal Flying Corps.

He flew as a fighter pilot with 66 Squadron Royal Flying Corps, later with 94 and 88 squadrons. He was awarded the Military Cross for gallantry.

He returned to Australia and made a career in civil aviation. He partnered on several flights with Kingsford Smith and Charles Ulm. During the 1935, Kingsford Smith's Australia-New Zealand flight he made heroic repairs outside the aircraft for which he was awarded the George Cross. During the 2nd World War he served with the RAAF as a ferry pilot.
In 1954 he was nationally recognised when he was knighted.

An interesting aviator and book of his life.
﻿