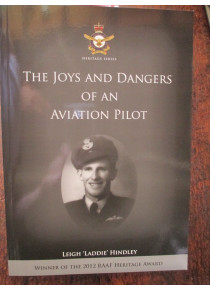 The Joys and Dangers of an Aviation Pilot﻿ By 'Laddie' Hindley﻿

'Laddie' Hindley﻿﻿ joined the RAAF in 1942 he trained on Wirraways at Uranquinty New South Wales.
After receiving his wings, he received further fighter training at the Operational Training Unit at Mildura.

He was allotted to 80 Squadron RAAF Kittyhawk fighter aircraft and was stationed at Aitkenvale Townsville﻿. Once their training was completed the squadron moved again to Nadzab in New Guinea on 24 February 1944﻿. The unit undertook ground attack missions against Japanese forces in and around Alexishafen and Madang.﻿ The Squadron then moved to Cape Gloucester, New Britain on 21 March 1944 to escort convoys and conduct armed reconnaissance patrols﻿.

In the final stages of the war, the squadron become established at Tarakan, where it flew close air support operations during the Battle of Balikpapan.
After the war," Laddie" continue with his RAAF service flying Mosquitoes which were used for aerial photography. He also become a flying Instructor on the DC 3 Dakota.

In 1961 he took on a new aviation career when he was selected for Bell 204 Iroquois helicopter training.

During the Vietnam War, he was a Flight Commander and Chief Flying Instructor with No 9 Squadron RAAF. In what was a remarkable career, Laddie Hindley draws on numerous personal stories of his time in the RAAF.
This book would be of extreme interest to all those who have had relations who served with the training units, No 80 Sqn and No 80 Flight or maintenance crews﻿.﻿
﻿