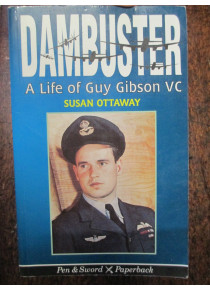 Guy Gibson was chosen to lead the great Dambusters Raid of 1943 as he had already proven himself to be a skilled pilot and a magnificent leader of men.
Gibson joined the RAF in 1936, he was a bomber pilot when war broke out. He won a DFC in July 1940 then, having completed a tour of operations volunteered for Fighter Command and flew nightfighters on 99 sorites during which he was awarded a bar to his DFC and the DSO.