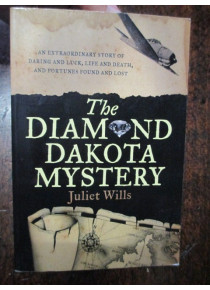 It's March 1942, and one of the last planes out of Java is about to wing terrified Dutch refugees away from the advancing Japanese army. At the last minute, a mysterious brown paper package is thrown to its pilot, Russian air ace Captain Ivan 'Turc' Smirnoff.

Heading for the supposed safety of Australia, the ill-fated DC-3 flew straight into the path of three Japanese Zeroes returning from a devastating air raid on Broome. Under heavy fire, Smirnoff miraculously landed the badly damaged plane on an isolated beach on the far northwest coast. The survivors were eventually found, but not before several had died from their injuries or thirst.

In the confusion, the package was forgotten.

Here, for the first time, is the full story of what really happened to Smirnoff's lost diamonds. ﻿