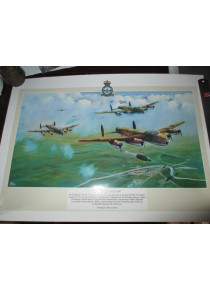 This is a print of the painting which shows the Australian members of the famous Dambusters 617 Squadron flying a bombing run in the Lancaster Bomber.  The print of﻿ an original painting by Tony Corbett depicts a scene from a bombing raid made on the 19 March 1945 when at 10 ton "Grand Slam" bomb was dropped from a plane flown by an Australian pilot crew.﻿

The overall size of the print 36.5 cm x 52 cm color as seen in the photos above. It has been printed on heavy card so the print can be framed.
It will be sent to you rolled via a Australian Postal cylinder.﻿﻿