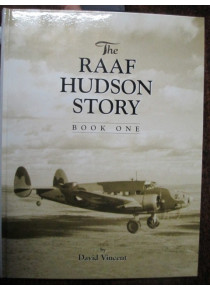 No doubt, this is the most comprehensive book that will ever be printed about the RAAF A16 Lockheed Hudson light bomber reconnaissance aircraft of World War II. The author states in his introduction that, ‘I decided to leave no stone unturned in my Hudson research’. A claim which is totally justified with the production of this book RAAF Hudson Story ﻿Volume 1 and subsequently the RAAF Hudson Story volume 2.

These books would be a valuable research reference for anyone who had a forebear in the RAAF squadrons that flew the Lockheed Hudson bomber in RAAF service during World War II and indeed after.
A most impressive book as the author has collected a vast amount of information about individual aircraft, pilots, crew, sorties, squadron history and even has chapters on what happened to the planes and men after the war. However, his main focus on the wartime history.

Just prior to World War II in 1938, the Lockheed Hudson was selected for the RAF. Initially it was required as a maritime patrol aircraft but soon took on various roles. The Hudson was developed from the Lockheed Model 14 Super Electra which was a commercial airliner. So with adjustment could be used as a troop transporter, general cargo carrier.

Following Japanese attacks on Malaya, Hudsons from No. 1 Squadron RAAF became the first aircraft to make an attack in the Pacific War, sinking a Japanese transport ship, the Awazisan Maru, off Kota Bharu at 0118h local time, an hour before the attack on Pearl Harbor.

By the end of World War II the RAAF had purchased 247 Hudsons. They had served in most theaters of war in which the RAAF flew.

This book Volume 1, covers the policy and procurement of the Hudson, operations in Malaya Sumatra and Java by 1 and 8 Squadrons, Maritime Trade Protection by 2,6,7,13,14,23,24,32 Squadrons,
operations of 459 Squadron Middle East, Australian Hudson training, Special Transport Flight 1 OUT New Guinea 1942 to 43, Survey work in the RAAF 1946, a named casualty list of personnel mentioned within this book, Hudsons built for RAF used by the RAAF, camouflage and markings.

Each of these books has an index of personnel, please email or ring me if you would like to know if a person’s name is within the index.