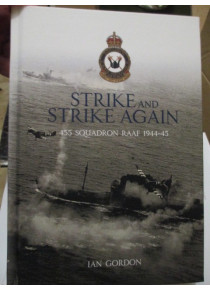 455 Squadron RAAF nicknamed 'The Viking Boys' flew the famous Bristol Beaufighter attacking German shipping over northern Europe.
This Australian Squadron in the years covered by this book had numerous missions over Denmark, Holland and Norwegian fiords. The twin engined Beaufighter was a much respected attack aircraft with 20mm cannon, rockets and bombs.
It was able to carry 8 rockets with devastating effect, highly destructive﻿ against ships.
The famous Wing Commander Jack Davenport AC DSO DFC and Bar GM MID was a member of the Squadron and Wing Commander C.G. Milson, DSO & Bar, DFC & Bar﻿. During the 1944-45 period covered by this book, they flew from RAF Langham in Norfolk﻿ and later RAF Dallachy, in Scotland.﻿

The book's detailed narrative is supported by many highly informative maps and photographs of men and machines.
The book concludes with several important appendix lists,
455 Squadron Operations Summary
Nominal Roll of all members collected in trade order.
Biographic Honours and Awards Roll

Surprisely, we always obtain enquiries about these unit histories after they are out of print when the price has escalated.
If you have an interest in 455 Sqn or Beaufighter now is the time to buy.