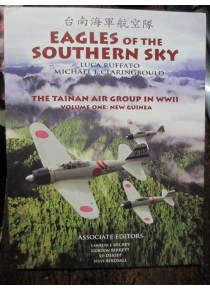 Eagles of the Southern Sky

Is a definitive history of the prestigious Imperial Japanese Tainan Naval Air Group. This heroic unit was assigned to New Guinea in April 1942. Although confident of victory, 8 months later the unit had been destroyed.

Eagles of the Southern Sky, was meticulously researched and written by two renowned World War II authors, four contributing editors, and many expert consultants of the Pacific air war.
The book features color profiles of every Japanese aircraft type operated by Tainan, and is complemented with equally detailed profiles of their enemy RAAF and USAAF aircraft.

All major battles are detailed, in many cases matching the pilot to pilot which took part in the dogfight.

This exciting detail sets a new benchmark for an English language work of a Japanese aerial unit.

This book is a classic, runs to over 350 pages, and is full of detailed information never before published.