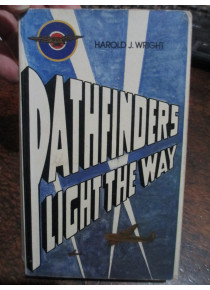 Book the 'Pathfinders Light the Way ' by Harold J. Wright. Harold a Pathfinder and survivor of 78 operational flights wrote this book from his own experiences. Pathfinder was the elite group of RAF Bomber Command. Chiefly volunteers from other squadrons led the great bomber streams which destroyed the many German targets during the war.

Wright wrote this as a novel, but it is full of his experiences as a Lancaster Pathfinder Navigator.