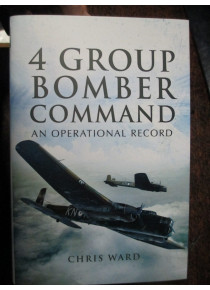 The book records in chronological order the WWII Operations of 4 Group Bomber Command. This book also contains individual squadron statistics, commanding officers, air base / stations and aircraft history lists and losses. It provides a detailed reference for one of the RAF's most important operational groups.
Australian RAAF Squadrons part of this 4 Bomber Command were 458 Sqn , 462 Sqn and 466 Sqn.

During the immediate period before World War Two, the RAF modified its command structure to rationalise for rapid expansion. Bomber Command was divided into six operational groups, each flying the same type of aircraft, including Wellingtons, Sterlings, and Lancasters. Chris Ward presents us here with the history of 4 Group Bomber Command, having previously acquainted us with the histories of 3, 5, and 6 Group Bomber Commands in three highly acclaimed volumes, published by Pen and Sword. He continues with characteristic ease, quality of research, and narrative pace, to present us with an operational record of the groups activities during a particularly dramatic period of aviation history. ﻿