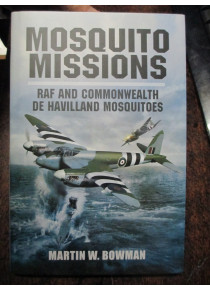 The 'Wooden Wonder ' combat aircraft of World War II has a growing band of enthusiasts. This book records information of the aircraft used in RAF and Dominion Air Forces, pilots and navigators personal reflections, many of which have never been unpublished previously.
The stories take the reader on the many different raids of the Mosquito - as a night fighter, fighter bomber, anti-shipping, Pathfinder, photo reconnaissance and precision bombing.

From Europe, the Middle East to the jungles of the Far East the iconic Mosquito was there!﻿