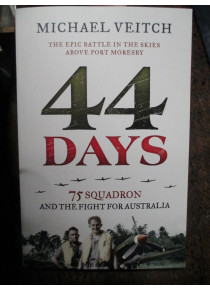 The title of the book, 44 days, refers to the time that the pilots of RAAF 75 Squadron were alone providing air defence for Port Moresby New Guinea. March 1942 were dire times for Australia, with bombs falling on Darwin, these brave and barely trained pilots fought a desperate battle at Australia's frontline.﻿
The Squadron flew P 40 Kittyhawks during World War II.

75 Squadron saw action almost every day during March and April 1942. They had much success with retaliatory raids against the Japanese.
This book is devoted to the Squadron and this short but important period during World War II.
RAAF 75 Squadron proud heritage began with the history as told in this story.﻿