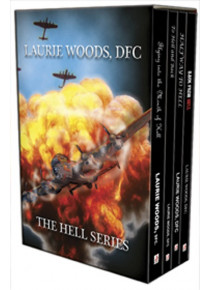 The Collector Slip Case with all four books.

1. Flying into the Mouth of Hell
The story of Royal Australian Air Force service culminating in a tour of operations against the enemy, whilst an aircrew member on the Australian Lancaster 460 squadron immediately following the invasion of Europe by the allied forces. Dedicated to the aircrew of Bomber Command, and to all those who did not return.

2. Halfway to Hell
The content of this book are based on personal interviews, personal service stories among my mates, members of the Royal Australian Air Force, and with historic records of airmen who were mainly trained in the Empire Air Training scheme. The scheme was set up to keep up a supply of trained aircrew to replace the immense numbers who were giving their lives.

3. To Hell and Back
To Hell and Back is the story of some of the other Australian airmen who flew with Bomber Command. Laurie Woods either knew these men personally or had heard of them during the campaign. These stories have been verified by conversations with the men or their relatives and in some cases historical records.

4. Back from Hell
The adrenaline that pumps through the veins of men flying Lancaster bombers over Germany while ack-ack explodes around them is only matched by the gut-wrenching nervousness in their stomach. “Will I be the next statistic?” Shortly after the war the memories keep flooding back through nightmares that are distorted from the reality but even more frightening.﻿