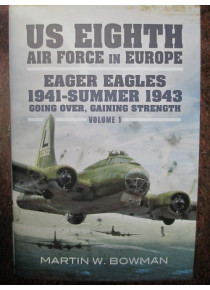 Using narrative accounts and new insights this book catalogues the dramatic and first-hand oral testimonies of the US Army Air Corps' B-17 bomber crews of the newly created Eighth Air Force that became stationed in East Anglia in 1942.

The history begins with shock of the unannounced Japanese attack on Pearl Harbor and how it affected the young men who were destined to fly and fight in Europe. American troops, or GIs as they were known because of their own derisive term of 'General Issue', began arriving in war-weary Britain in the months immediately after Pearl Harbor.

Bomber and fighter groups made an especial impact. The young Americans with their well-cut uniforms, new accents and money, created a colourful heroic chapter in the lives of the British people that is still remembered today.

The Americans and the villagers and townsfolk of East Anglia shared a close attachment that only wartime can create. England between 1942-45 was a battle front. The civilians were all involved in the war effort - as shipyard and factory workers, Red Cross and Land Army, farmers and firemen. Above all they were stubborn, determined fighters who had already endured more than three years of war. Into these lives came the sights and sounds - particularly the jargon - of the Americans, unprepared for the difficulties of flying in Britain's and Northern Europe's unpredictable and difficult weather. It is the story of the American's first encounters with the Luftwaffe, heavy Nazi air defences and the wartime strictures that Britain had already endured for three years.

These are their memories.