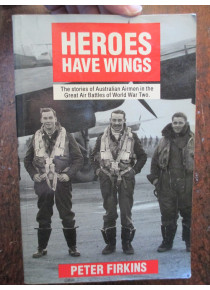 Heroes Have Wings stories of RAAF Airmen during WW2

Heroes Have Wings - The stories of Australian Airmen
In the Great Air Battles of World War II
By P. Firkins

Peter Firkins is a West Australian who volunteered for service in the RAAF during World War II. He completed a tour of operations with 460 RAAF Lancaster squadron bomber command.
His fascination with military history has made him one of Australia's most prolific authors having published five books including the widely acclaimed the 'Australians in the Nine Wars'.