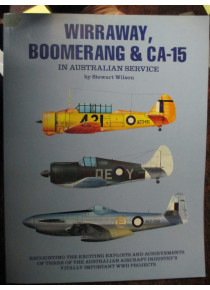 Wirraway Boomerang and CA 15 in Australian Service by S Wilson

Over years this book has been acknowledged as a concise reference to the WW2 aircraft shown above.
Recounting the exciting exploits and achievements of Australian made Fighter Aircraft of World War II. This book details the Commonwealth Aircraft Corporation home manufactured fighter aircraft. The CA 15 was a superior developed Australian made fighter which the end of WW2 beat to the production line.
Includes sections on each of the planes regarding the building, test flights, Australian RAAF operations during WW2, RAAF data tables, RAAF liveries.

Also the Australian Wirraway a variant of the US T6 Texan and the Boomerang which was the first combat aircraft designed and constructed in Australia.

Over the years, due to the immense amount of detail within, these books have become highly sought after.