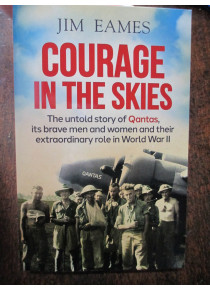 Courage in the Skies Untold story of Qantas, its brave men and women and their extraordinary role in WW2 by J Eames

Between 1942 and 1943, Qantas lost eight aircraft during its involvement in Australia's war against the Japanese. Over sixty passengers and crew died as a result. Yet Qantas' exemplary contribution to Australia's war effort and the courage of its people in those difficult times has been forgotten.

Courage in the Skies is the remarkable story of Qantas at war and the truly heroic deeds of its crew and ground staff as the Japanese advanced towards Australia. Flying unarmed planes through war zones and at times under enemy fire, the airline supplied the front lines, evacuated the wounded and undertook surprising escapes, including carrying more than forty anxious civilians on the last aircraft to leave besieged Singapore.

Absorbing, spirited and fast-paced, above all this is a story of an extraordinary group of Australians who confronted the dark days of World War II with bravery, commitment and initiative. They just happened to be Qantas people.﻿