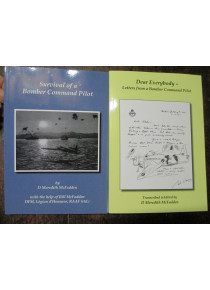 This book is the WW2 story of Bill McFadden a recipient of the Distinguished Flying Medal and the Legion d'Honneur for his gallant service with Bomber Command during World War II.

In October 1940, Bill joined the No 5 Elementary Flying Training School at Narromine New South Wales. He successfully completed his training flying a Tiger Moth and was quickly transferred to the Empire Training Scheme which was undertaken in Canada.

Initially the No. 4/5 Course of the Empire Training Scheme used Anson aircraft, as Bill witnessed, even during training lives were lost due to accidents - two of his friends were killed in a mid air crash.

These were dire times, as Bill completed his training and commenced his Atlantic crossing to England, the Bismarck had just sunk the HMS Hood.
Soon he was in Gloucestershire with 21 Operational Training Unit flying Mark 1c Vickers Wellington bombers.
He successfully completed training, being allotted to 458 Squadron operating Wellingtons against German ships and U-boats. Due to the large 1000 bomber raids over Germany and of course the high attrition of Lancaster bomber crews he received a temporary transfer to RAAF 460 Squadron.

He was then transferred back to 458 Squadron as his Squadron was leaving to fight Rommel in the Middle East. During 1942, he conducted several attacks against Germans located in Tobruk. While flying out of Malta, he was awarded the Distinguished Flying Medal for his service against enemy shipping.

In late 1943. he returned to the United Kingdom to take up training instructor duties, while there he become a casualty of a landing accident.

After the war, his interest in Bomber Command never wavered and he kept in touch with many of those who had served with him, particularly in 458 squadron. He sat on the Committee of the Bomber Command Association of Australia. He had a long and distinguished civilian ﻿career﻿ founding Warsash Scientific which is now a leading supplier of scientific instruments and components﻿.

In 2015, Bill McFadden was awarded the Legion d'honneur for his service during World War II.

These books would be of high interest to anyone researching The Empire Training Scheme, 458 Squadron, 460 Squadron or the life and times tribulations of an Australian RAAF pilot during World War II. The valuable narrative is supported by the veteran's own photograph collection.﻿