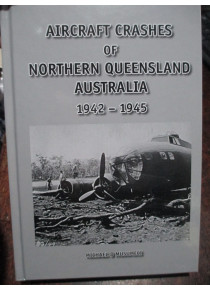 Military﻿ Aircraft Crashes of North Queensland Australia 1942- 1945. A large book of 575 pages which lists over 50 of the military aircraft crashes which occurred in Far North Queensland during World War II. The area which is covered from Townsville to Cairns including Cape York, Horn Island, Iron Range.﻿ An immense amount of research has been undertaken to complete the detailed information within the book. The narrative supported by numerous photos of the crashes, graves etc. where available.﻿﻿

May we suggest, this type of book, when out-of-print will become very expensive and highly collectible.﻿