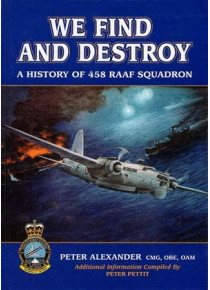 We Find and Destroy A History of 458 RAAF Squadron by P. Alexander

This military War Book is a History of the RAAF 458 Torpedo Bomber Squadron which flew Wellington aircraft in Britain and the Mediterranean Sea region during World War Two. The book covers their time forming, training and fighting. They carried bombs, mines, torpedoes and depth charges, playing a major part in stopping the movement of enemy shipping. After pursuing the retreating enemy from Egypt to Algeria, through Sardinia and north into Italy, their war ended at Gibraltar. This third edition, ensures that the ground crew also receive adequate recognition and addition photographs and previously unpublished reminiscences have been added.